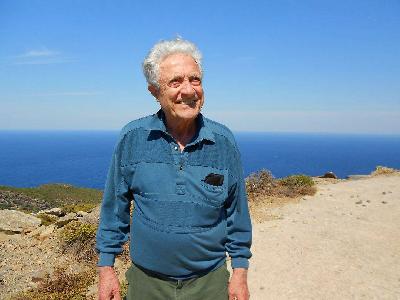 Mr. Anthony Tony Constantine Frangos, of Spring Hill, Florida, Perdiki, Ikaria Greece, Philadelphia, PA., Pennsauken, NJ born on February 12, 1928 in Perdiki, Ikaria, Greece, to the late Marr Frangos and the late Constantine Anthony Frangos, passed away at age 90 on January 1, 2019 in Spring Hill, Florida. Anthony attended School in Perdiki, Ikaria Greece. Anthony served in the Greek Navy in World War II and he also worked in the Industrial Coatings industry as a foreman at Keystone Painting Company until he retired in 1990. Anthony was the beloved husband of Stamatina Mary J Frangos. He was preceded in death by his brother, Sotiri Frangos; and sister, Helen Tripolous. Anthony is survived by his sons, Constantine Anthony Frangos and Zachary P. Frangos; brother, George Frangos; sister, Stella Gasparis; and grandchildren, Maria Christina Frangos and Thalia Aphrodite Frangos. He also leaves behind his dog, Martha. He was a member of one of the Pan Icarian Brotherhood for over 50 years, and and member of AHEPA for over 40 He had a passion for his family, gardening and baking his own bread. Never settling for mediocrity in anything. He had a quiet sense of humor that many may have missed if not paying attention. Friends and family members may attend the funeral service on Saturday, January 5, 2019: Viewing will take place from 1:00-2:00pm, funeral service at 2:00pm, at St. George Greek Orthodox Church, 9426 Little Road, New Port Richey, FL 34654.