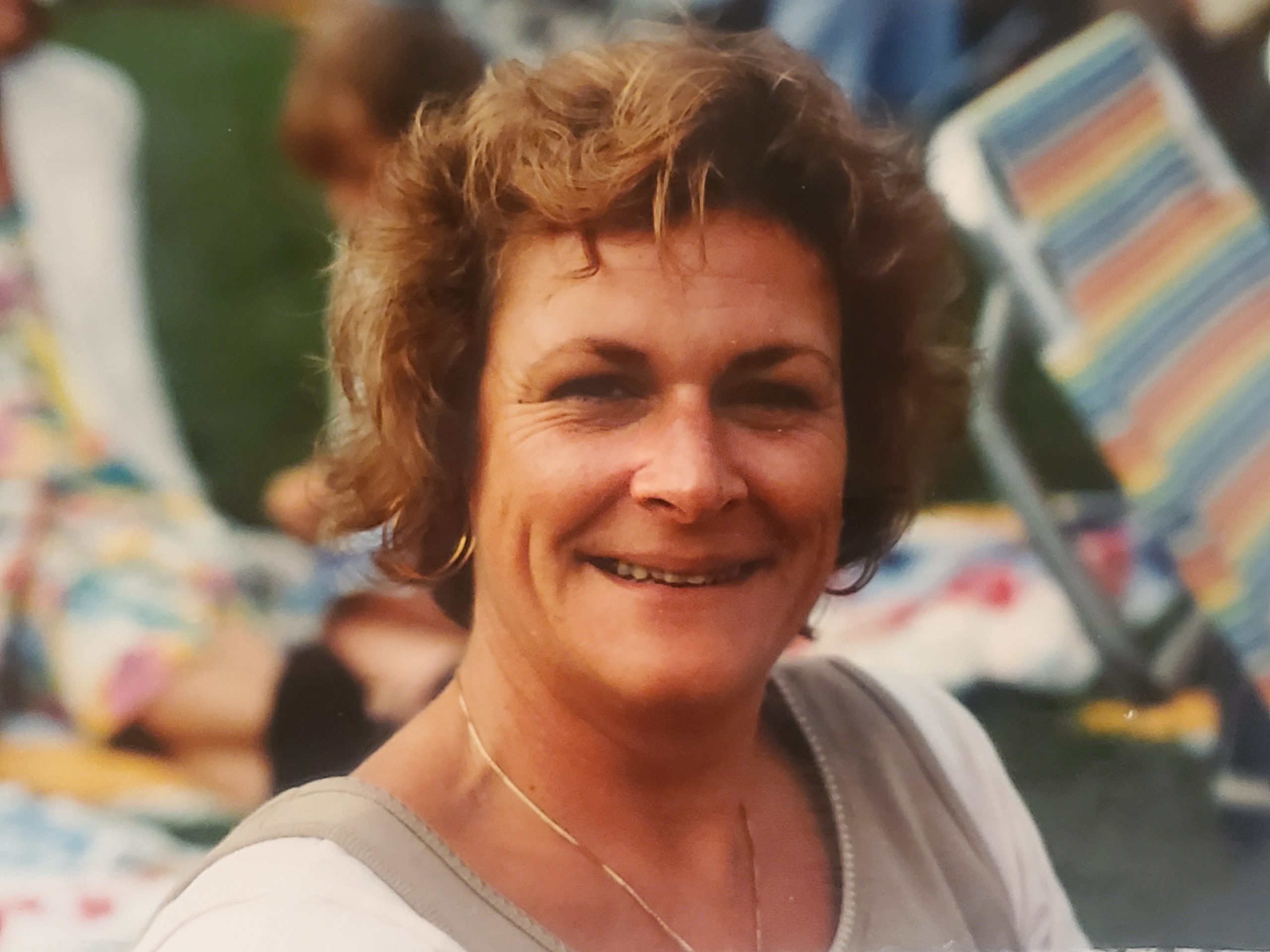 For the first time in Arlene’s lifetime, she was early for an event. Just months shy of her 65th Birthday, Arlene Kay Reinhold made her final party entrance to the kingdom of Heaven on February 23, 2022.

Her life and story was tethered to advocacy for children and her community, from Maine, to Cape Cod and for the last decade, Florida. Princess Arlene was born on June 6, 1957 to father Rodney R. (Rocky) Reinhold and mother Virginia A. (Gini) Reinhold. She spent her childhood and tween years in Montgomery, MA getting into mischief from an early age with her big brother and the Chapman boys. In 1965 Arlene wanted a color TV, but got a little sister instead, Paula Jean (PJ) and in later years she not only had a little sister but a best friend. In 1971 Arlene moved to Westfield, MA with her family ready to make new friends and test her limits at Westfield High School.  She and her new found friends were “the cool kids” and arrived at Westfield High every morning in a convertible, well not every morning, Arlene was quite adept at skipping school! Graduating from Westfield High in 1975, she took a circuitous route to a college major but finally found her educational home at the University of Southern Maine (Portland) where she earned a Bachelor of Arts in Social Work.  Her purpose was clear, protecting abused, neglected children in crisis.Her first job in her field was in southern Maine, at the Little Brothers Shelter where she used her empathy and training to help children develop resiliency and hope. To make ends meet on a social worker salary, Clean Arlene’s Domestic Engineering was hatched and she spent decades working her off hours cleaning cottages, caretaking some very special elderly friends and and periodically throwing away her Dad’s stuff away in the garage. Her professional passion shifted with her move to Cape Cod in the late 80’s and she became an advocate for her community.  Her first Executive Director position in the Not for Profit world was the fledgling Cape Cod Times Needy Fund.  Arlene used her years of advocating for children and families on Cape Cod to excellent use by connecting them to services and programs to help them to continue to live on the Cape. During her time building the development of the Needy Fund and helping her community, Arlene entered the rigorous accelerated Masters program at the University of Massachusetts (Boston) where she earned her Masters in Human Services Administration. The Cape Cod community benefited from Arlene’s compassion, empathy and mission focused drive, as did the numerous Not for Profit agencies she worked tirelessly for including the March of Dimes, AIDS Support Group of Cape Cod and the Red Cross. Her move to Florida to be closer to her parents brought her back to social work and children advocacy and she spent her last working years helping families across the Tampa region.

No story about Arlene would be complete unless it mentioned her fierce, joyous and loyal friendships that spanned decades back to high school.
Her daffy high school girlfriend Janet, her Mainiac best friend Peter, her bestie on Cape Cod, Phyllis, and her protective and compassionate friend Geraldine who helped Arlene manage her final years.

If you knew Arlene you know her family is heartbroken that we have lost her wit, sarcasm, fierce love and loud joyous laughter.

She leaves her Father Rodney R, Mother Virginia A, brother Rodney R Jr. and wife Natalie, sister Paula J and husband-in-law David Hersey.
And the next generation of our family will miss her play dates and surprise gifts including niece Melissa Phelps and husband Mitchell and her beloved great nephews Johnathan, her twin birthday boy Trevor and little Derrick.

To honor her legacy, please consider a donation to:

Thank you for sharing this Rod. Her laughter was enough to make you laugh right along with her.
I’m grateful for the year’s we were close.
My heartfelt sympathy to you and your family.
🕊

Rest in Paradise, sweet Mermaid – I love you to the moon and back.

Dear Rocky and Ginny Reinhold, Brian and I are so very sorry to hear of your loss of Arlene (your Daughter).
May she rest in peace. She will be truly missed by all who knew and loved her. Please know Arlene will be keeping
watch over you both. I did not know her, but I know how pleasant her parents are. Please know she will love you both forever and she knows you both will love her forever.

This is a very touching and thorough tribute. I remember all the Rocky Reinhold cousins getting a taxi back to Westfield after a raucous time in my parents’ backyard in Florence, and the joy and laughter of Arlene echoes in that memory as I read this. I am so sorry for your loss.

For Arlene and Family

Our thoughts and prayers are with your family. We only met her recently but could tell how much she loves her family. She was a breath of fresh air and has a light that now shines in heaven.

Arlene you will be missed by everyone, We were lucky to have had you in our lives. The happiness in this is you are no longer suffering in illness sickness and pain. Your legacy will live on and your life served great purpose. Condolences to the entire family.

To Arlene’s family:
“May the stars carry your sadness away,
May the flowers fill your heart with beauty,
May hope forever wipe away your tears,
And, above all, may silence make you strong.” — Native American Chief Dan George

Thinking of you all at this time. May Princess Arlene be dancing in the sky.

I will miss our time together but will never forget those times! I will always have those special memories and keep them close to my heart ❤️ You were more than a sister-in-law. You were a dear friend. I wish you peace Arlene.

Those we love
don’t go away
They walk beside
us every day,
Unseen, unheard, but
always near,
Still loved, still missed, and
very dear.
-Alex MacLean

I will never forget the special times we shared. I will keep those times close to my heart. You were more than a sister-in-law. You were a dear friend. May you have peace Arlene 💗
Those we love don’t go away
They walk beside us every day,
Unseen, unheard, but always near,
Still loved, still missed and very
dear. – Alex McLean

My deepest sympathy to Arlene’s family: Rocky and Gini, Rod and Natalie, Paula and Dave. Arlene was a feisty, generous spirit who will surely be missed. Keep your memories dear.
Love, Debbie

You are now out of pain my dear sister. It has been so hard watching you suffer over the last few years. I miss you dearly and knew when I left your room last week it was our good byes to each other. Will love you always.

Arlene, you are
Now with the best of the best.. you are with Billy, My other best friend, Ray Brown, and so many other’s.. but when you are the best of the best, you only get the best! You are now an Angel protecting those of us here.. And when I think of you, I will remember that God only takes the best.. My thoughts and prayers to your family and friends, I was
Blessed to be one of them..God bless you til eternity. Love and God bless, Jo MacKay DiBella, Pompano Beach, FLA.

Arlene was one in a million. When my children were small I wanted to walk for the March Of Dimes. After talking to Arlene on the phone she roped me in to help organize the Walk with Pat. She always had a smile and when she laughed you knew exactly where she was in the room. And yes Paula she did share some stories and you could tell you were more than a sister to her.
RIP Arlene you will be missed

My darling daughter,you are missed more than you know. Monday was your 65th birthday. The angels probably threw you a party in heaven. Wish it had been with us. But your birthday twin, Trevor came with Rod and had lunch with us at our new home. Took some of the ache away. Will love you forever. Mom