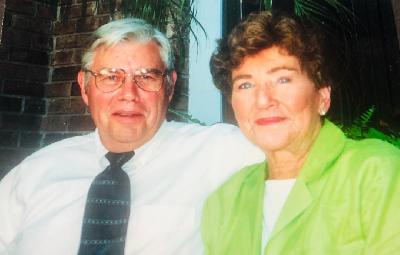 Benjamin L. Brown was born on November 22, 1929 in Indianapolis, Indiana. He graduated from Howe High School where he met the love of his life, Barbara Jean. After high school he attended Purdue University. He and Barbara were married in 1950 in Indianapolis. Over the years they had 4 children; Becky (Dobbins), Bethany (Carvallo), Belinda Brown, and Beverly (Anders). Ben started working in banking in Indiana, which led him to his love of real estate appraising. In 1970 Ben moved his family to Florida to pursue his real estate appraising career and to be able to play golf 12 months a year. He achieved the MAI designation from the Appraisal Institute in 1980 and opened his own appraisal company, Brown Appraisals, Inc. in New Port Richey, Fl. The MAI designation is the highest standing that is available to an appraiser. The Appraisal Institute is a professional organization which monitors its members and holds them to a higher standard. The MAI designation also certified him as an expert witness on real estate values. Ben was also very active in the Pasco County Board of Realtors and was past president of the Pasco County Board of Realtors.

Ben was a devout Christian and served many capacities in the Christian Church. Most recently he was a member of Generations Christian Church in Trinity. He loved singing and had a great passion for the gospel songs.

His true passion in life, besides his family, was golfing. On a golfing trip to Scotland he injured his ring finger getting off the plane. Despite the pain he refused to seek medical attention and went on to play the historical courses of Scotland. He amazingly shot a round of even par at the old course of St. Andrews. Upon returning to the United States his finger became a detriment to his golf playing, so he chose to have the finger amputated so he could continue to play golf.

He had a group of friends that he played golf with every Saturday and some week days. The friendships he developed over the years with his golfing buddies were like gold to him. He cherished every single one of them and were like family to him.

Ben was a devoted husband who became the main caregiver to his wife, Barbara, for 15 years after she suffered a massive stroke. He cherished the time he spent with her. Ben was blessed with his 4 daughters and 7 grandchildren. A Celebration of Life is scheduled for Sunday, November 17th, @ Generations Christian Church. Time of service is 2PM.

In lieu of flowers the family is asking for donations to be made to Pasco County Olympics.

Sorry to hear about Ben passing away. He was a good man. Now he is with his wife.
I'll remind everyone that knew him at grief class, we were all asking about him.