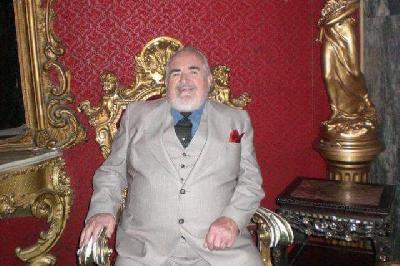 He was born July 11, 1943, in Hartford, Connecticut, the son of Laura Henrietta Alix and Florian William Greenbacker.

Burt proudly served in the U.S. Air Force during the Vietnam War, stationed in Germany, and later moved to Florida to work as an entrepreneur, a mechanic and a recycler.

In fact, family meant everything to Burt. Always gathering for holidays, family events and milestones. Last July his entire family joined in celebration of his 75th birthday. Coming together in love, family traveled from all over to enjoy good food, music and many games of pool. Family, at least, including grandchildren Phillip Jr., Amber and Josef, as well as great-grandchildren Chase and Phillip III.

As they posed for a picture of the entire family, Burt beamed, telling all of them how happy he was.

While he always lived his life as a Christian, Burtâ€™s devotion to Jesus only grew as he got older, leading him to regularly attend the Deeper Place congregation that now meets on Ridge Road. Not always one to speak up in group gatherings, the Holy Spirit moved Burt for the first time just days before he was called to Jesus, preaching to his fellow parishioners about the importance of hope, especially in todayâ€™s generation of young people.

Burt always worked to make everyone around him smile, many times with a good joke on the ready. He enjoyed a good game of Texas Hold â€˜Em poker, and he would spend his free time catching a classic episode of â€œStar Trek,â€ and right after, some inspiration from â€œTouched By an Angel.â€

Burt also knew how to strike out â€” at the bowling alley. At one point in his life, Burt played on a number of bowling leagues, and even coached a junior bowlerâ€™s league in Land Oâ€™ Lakes, Florida.

His family, as many families do, spread out over the years, touching different parts of the country, and even the world. But for Burt, love could overcome everything â€” especially distance â€” and he always felt that love from his daughters, from his grandchildren and great-grandchildren, and from his many other family members and friends.

In lieu of flowers, the family requests donations be made to DCI Missions, a faith-based non-profit building dormitories for students studying the Bible. Make donations to dcimissiontrips.com., and write â€œDeeper Place-Burt Greenbackerâ€ in the notes or “special instructions to the seller.â€ Or give during the Celebration of Life, making checks payable to DCI Missions, with â€œBurt Greenbackerâ€ written in the memo line.”

Into the arms of Jesus and his Angels you have been entrusted. My heartfelt thoughts go out to those you had to leave behind. We will all be together again <3 I love you Uncle Bud!