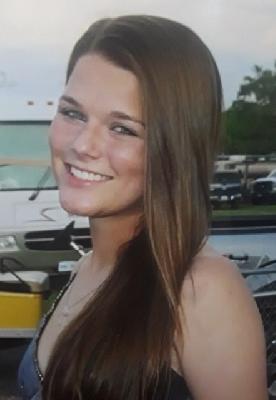 Carrie McKenzie, left us to join our heavenly Father on July 20th 2018, she was only 21 years old. She was born on June 14th 1996, as the baby of the family. She had the most joyful spirit and radiant smile that just lit up a room when she entered, and the most infectious laugh that would bring a smile to everyoneâ€™s face. To us, she was always cheerful and beautiful. From the beginning, Carrie was involved in sports, which included Karate and Tennis. In middle school, she found the Town-n-Country Leagueretts where she fell in love with softball and was an All-Star pitcher, played third base and short stop for 10 years. She was an avid KTM 4-wheeler rider and dirt biker who often went to Crooms State Park with her family and friends to ride the trails. When she reached High-school, her sport of choice turned to Flag Football under the direction of Coach Hernandez. She also was an accomplished Saxophone player and marched with the Alonso Raven Marching Band. Carrie enjoyed waterskiing, wakeboarding and jet skiing on Lake Tarpon as well as Grand Traverse Bay in Traverse City , Michigan where she often visited during her summers. She loved the companionship of her co-workers at Whiskey Joeâ€™s where she worked as a server while attending classes at the University of South Florida (GO BULLS). She excelled academically, was a Bright Futures scholar, and was to start her senior year at USF as a Chemistry major. She then planned on pursuing a career in pharmacy like her father and Grand Father. Carrie had a love for cats and logged many hours as a volunteer to the Tampa Bay Cat Crusaders and fostered dozens of cats and kittens.
Carrie will be deeply missed by her loving family which includes her Father, Robert (Bob) McKenzie; Mother, Denise (Rottenbucher) McKenzie; Sister, Jennifer Meyering (Stefan); Brother, Jay McKenzie (Chantelle); Sister, Jamie Harder; and Sister, Crystal McKenzie. She will also be missed by Aunts and Uncles, Kathryn & Mark Fritz, Paula & Bruce Patrick, Dianne Rottenbucher, Kristin and Mark Kleinfelt; and Uncle Peter Rottenbucher. She is also survived by her Grandmother, Donna Rottenbucher (Peter John III) of Michigan; and her Grandfather, Miney Roseberry (Mildred) of Florida; and many extended family members too numerous to enumerate! (Many of which live in the Panama City area). Most of all, she leaves behind her favorite non-human possessions, her cats, Scribbles and Po. They will be in the care of Denise and Bob.
In lieu of flowers, we are asking for donations to Carrie's favorite organization; Tampa Cat Crusaders: https://www.tampacatcrusaders.org/

I wish I had the words to lighten your agony but sometimes words are not enough. Please accept my deepest condolences in the loss of your beautiful and amazing baby girl. Not very often young people leave such deep foot prints behind for others to follow.

My deepest sympathies to Carrie's family.I spent many shifts working alongside Carrie appreciating her care and concern for the kitties. She was an amazing teen volunteer as she quietly went about her duties always focused on the goal of treating each cat she encountered with love and kindness. She was a joy to know. Carrie was the ideal of what a volunteer was supposed to be. Carrie was always present and focused at the task at hand, again, putting her heart into her work at Cat Crusaders.

Vivian and Blair Friedman (Friend of the family)

Our deepest sympathy to Denise and Bob and the family for your loss. I know there are no words to ease your pain but just know you are in our thoughts and prayers. Our hearts break for you. I hope that memories will comfort you. ðŸ™

Sally Quick (Friend of the family)

So hard to take in the sad news! My heart is heavy for you, Bob and Denise as well as extended family and friends. My prayers are with you for comfort and peace. Sincere sympathy and love to you,
Sally

Our hearts are grieving with you and we know there are not enough words to comfort you. Just know that those of us who had the joy of knowing her will always remember Carrie was one of those amazing creative and accomplished creatures of God who also had the precious gift of being able to light up any room she graced with her gorgeous and flashing smile. Her smile and twinking eyes are forever treasured in our hearts along with the memory of her extraordinary list of accomplishments and the endless love she had for her family.

We are all so profoundly saddened by the loss of Carrie. It has been many years, but I remember the sweet toddler who followed Lisa and Jamie around..and how Jamie doted on her. We send your family loving prayers of comfort and healing. In Gods love – Kate, Lisa, Charles and Catherine Campbell

So sorry to hear of your family's loss Bob. I will keep all of you in my prayers. Carrie sure was a beautiful young woman. Gone way too soon.

Carrie, my heart is breaking for you and for your family. You were such a memorable friend to me, my Lily and Mo, we used to frequently walk together and talk. Such a loss, may you find peace and always be the spirit for friends and family that keeps a smile on their faces. You will be so missed, sweet girl.
Love, Lowie

Dearest Bob and Denise, Jennifer, Jay, Jamie and Crystal,
Please accept our deepest and heartfelt sympathy. May you find comfort and peace in your memories of your sweet daughter and sister. We feel blessed to have been a part of her life. We love you. God bless and be with you always.
Love Always, Kacz and Lori.

My deepest sympathies to you all in this very difficult time. I can not imagine what you all are going through and as a parent my heart is breaking. I pray for God to give you strength and peace. May you be uplifted by the outpouring of love you will all receive. God bless you all. Much love to your family.

Dave and I offer deepest sympathy and prayer to Denise and Bob and the family for your loss.May GOD bless your family and bring peace and comfort during this difficult time.

Carrie was a beautiful girl, inside and out. I know how very proud you are of her. I cannot even begin to comprehend the loss and pain that you are suffering right now, but I pray that the love of those around you provide comfort and that the Lord provides your family with peace during this sad and difficult time. God has taken a wonderful soul, full of beauty and love, to be with Him in Heaven. May we all find comfort in knowing that Carrie is forever safe in the arms of our Father and watching over us all. My deepest condolences and love go out to your family.

The loss of your beautiful Carrie is beyond heartbreaking. She will be missed by every life she touched. We are keeping all of you in our thoughts and prayers during this tragic time.

Our love and prayers go out to the McKenzie family. We were so sad to hear this news about Carrie. Her beautiful smile and lively personality is forever in our hearts!

Bob and Denise
So sad to hear about your wonderful 21 year old Carrie. The hole in your heart will always be there. A tragedy that time does not heal. Please call us at 8132453259

No words can express our sorrow and deepest condolences for you, Denise and Bob, and your family. God bless and keep you.

Our deepest sympathy to all of Carrieâ€™s family and friends during this extremely difficult time. Carrie was such a smart, beautiful and quick-witted young lady. She will always be remembered; God rest her soul.

Rest In Peace Under Shade of All loving mighty father in heaven,

With lots of love â¤ï¸

Dr. Brady and Friends send their deepest condolences. May Carrie Rest In Peace and May her family and friends be comforted by her memory.

My prayers are with you and your family. May God give you peace and strength during this painful time.
Alejandra

I wish I could be there to celebrate carrieâ€™s life. Iâ€™m there in spirit. She was the ray of light everytime I walked through the doors at work. The heart of gold. Would listen and give me advice and such a positive inspiration in my life. Her positivity and vibe will always stick with me. I ll miss her and always remember the good times. Rest in paradise Carrie. You will definitely be missed!!! But never forgotten .

I am crushed to hear this news of Carrie's passing. She was an amazing kid and she will be missed!

I am so so sorry. My heart goes out to all those close to her. This is heartbreaking.

Bob and Denise, so very sorry to hear about your angel! Words cannot express how saddened we are to hear about your loss. Carrie was an absolute joy to know and beautiful on the inside and out. She brought to much joy to my little Evan when she would watch him. Wishing you comfort and healing. Our prayers are with you and your wonderful family. Jay, Elizabeth and Evan Vaughan

I just wanted to send my condolences to Carrie's family and friends. Carrie has been my client for almost 2 yrs now. I did all those crazy designs in her hair. She was an amazing person and I am just torn by this news. If there is anything I can do please let me know. My prayers go out to her family. God Bless

I saw Carrie's notice and could not help but grieve the passing of such a beautiful young person. She touched me. As a parent who also lost a child far too soon, my heart goes out to her family. I call it the club that no one wants to join..and yet here we are heartbroken, unwilling and unprepared. Focus on her special life and celebrate …no day is easy…some days are worse. Peace to all of you. Sandra R.

I'm so sorry to hear that Carrie has died. We used to go to the same school together. She was a great friend and I wanna extend my deepest sympathy to you and your family.

im deeply sorry about the loss and i hope you all stay true and to carrie herself if she can read this i miss you and you were like a big sister to me.

im deeply sorry about the loss and i hope you all stay true and to carrie herself if she can read this i miss you and you were like a big sister to me.