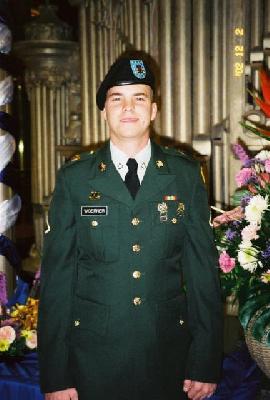 Woerner, David T., Jr.,
35, of Weeki Wachee, passed away Feb. 11, 2018. Born in Atlantic City, NJ, he graduated from Gulf High School in 2001 where he enlisted in the United States Army. He proudly served his country from 2001 to 2013. During this time, he served two tours in Iraq where he was injured resulting in an honorable medical discharge. Retired Staff Sergeant Woerner, Jr. relocated with his wife, Christine to Florida in 2013.
David is survived by his wife, Christine; daughter, Kennedy; parents, David, Sr. and Deborah Woerner; sister, Jackie (Dave) Lombardi; 4 nephews; maternal grandmother (Mom Mom), Jacqueline Bishop; paternal grandfather, John Collins; and many loved ones.
Visitation will be held on Tuesday, Feb. 20 from 10AM to 12PM with service at 12PM at Dobies Funeral Home, Old CR 54. Committal service will be held at 2:30PM at Florida National Cemetery, Bushnell, with military honors.

David and I served together in Iraq. He was a top notch Soldier and Warrior. Christine and Family you are in our prayers. Rest in Peace Brother. FH4L

Christine I'm so sorry for your loss. Me and David may have had our issues at times. But he will be missed. This news hurt my heart. My number has never changed if you need someone to talk to.

David was a great Soldier it is with a sad heart to receive the news. I will truly miss his always smiling outlook on things when all he!# was breaking loose. My wife and I send our sincerest condolences. RIP brother as your guard duty here on earth has ended we got ya from here.

My condolences the family, David's passing gives me a heavy heart. He was a great man among many. Sending prayers and good thoughts. FH4L

Dave and Debbie, You are in our thoughts and prayers. We hope the wonderful memories you have with David Jr, carries you through the next days and weeks, to bring you comfort.

We were so sorry to hear of your loss. Our thoughts and prayers are with you at this unfortunate and difficult time.