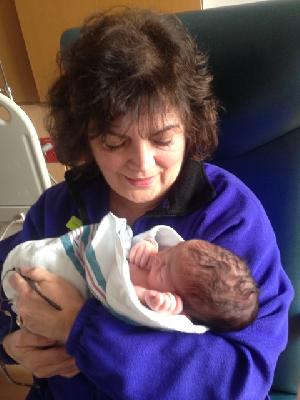 Diane Keritsis Mayorga died on October 11, 2018 in Holiday, Florida, after a valiant battle with a long illness.
Diane was born on January 26, 1955 in Chicago, IL, the daughter of Stella and Dennis Keritsis.
Diane spent the last three decades in Holiday, FL with her beloved family and friends. Her Greek cooking was only surpassed by her Greek dancing. A cup of coffee and a friend or two made for an evening of great conversation.
She will be greatly missed by her mother, Stella Keritsis, brother, George Keritsis, and her children, Sia Mayorga, Wilmington, NC and Stephanie Barrus, Holiday, FL, who were the light of her life. Much of her time and passion was devoted to her grandchildren, Christian, Owen, Sayed, Gabriel and Zoe.
Diane was preceded in death by her father, Dennis Keritsis, and granddaughters, Elizabeth and Dianna.

In lieu of flowers, the family requests that monetary gifts be made to St. Nicholas Greek Orthodox church, 608 South College Road, Wilmington, NC 28403.

She was so very proud of her grandchildren who serve as altar boys and their active participation in the Hellenic culture. She reminisced often about seeing her grandson Sayed, perform in the Hellenic Dance Festival in January. She was so filled with pride at their accomplishments. Please note on the memo: Donation in memory of Diane for â€œNea Smyrni dance troupeâ€.
Diane was very thankful for her fantastic friends, Joanne and Chuck Mangos, and Paulina Vasilakos, that were a constant support in her life until the very end. Her family extends sincere gratitude and appreciation to the staff and management of Gulfside Hospice Care for their compassion toward Diane.

I feel how weak and fruitless are any words of mine which shall attempt to beguile the grief of a loss so overwhelming. But I cannot refrain from tendering to all who LOVED DIANE the consolation that may be found in the MEMORIES of our beloved and now departed Diana.
After learning of her illness more than three (3) years and two (2) months ago, Diana took the decision and made the valiant effort to fight her cancer and to fight for life and to fight to remain in full control of her remaining time on this earth, in the furtherance to depart when the time came in manner of her own choosing. She was true to herself to the final end without compromise,.. and I will have the memories created during her lifetime for the rest of my life.
I pray that our Heavenly Father may assuage the anguish of the bereavement of all those who loved her, and leave only the cherished memory of our beloved Diana,.. Mother to Sia and Stephanie, Daughter of Stella and Dennis, Sister to George (me)
The Keritsis Family