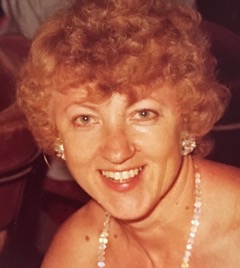 Dolores â€œDeeâ€ Niegos, 85, of New Port Richey, FL, died August 21, 2018. Born the sixth of nine children to Polish immigrants Boleslaw and Longina Wisniewski in Calumet City, IL, Dee from an early age stood out as an ebullient and irrepressible lover of people and the owner of the most joyous heart. Her defining trait was an outgoing warmth. In her youth, she helped out at the family business, Home Bakery, while also finding time to shine in countless clubs and sports at Thorton Fractional North High School in Calumet City. She graduated from the Hammond School of Business, but after her first child was born turned to what would become her lifeâ€™s true passion â€” building a family with the love of her life, engineer John Niegos. They married in 1956 and raised six children together in Munster, IN, and Houston, TX. After moving to New Port Richey, Dee continued to relish the opportunity to bring joy to others and enjoy life to the fullest. She was recently retired after serving for 20 years at the James P. Gills Family YMCA in New Port Richey where she touched countless lives, welcomed families and nurtured babies and toddlers.

Dee died in the arms of her loving husband of 62 years, John Niegos. She is also survived by her brothers Robert Wisniewski, Mike Wisniewski (Carole), Tom Wisniewski (Judith), George Wisniewski (Terry), her sister Mary Cobb, her children Carole Smith (Michael) of Houston, TX; Lauran Niegos (Bruce) of Plymouth, MA; John Niegos of Houston, TX; Philip Niegos of Dallas, TX, Patricia Liles (Stinson) of Memphis, TN; and Richard Niegos of New Port Richey, FL. Dee was a loving grandmother to six grandchildren, and two great grandchildren. She was preceded in death by her brothers John Wisniewski and Ted Wisniewski and twin sister Dorothy Pasko. Visitation will be at Dobies Funeral Home in New Port Richey, FL, at 8825 Old CR54 on Friday, Aug. 31 from 5-7 pm. A funeral mass will be at St. Thomas Aquinas Catholic Church in New Port Richey at 11 am on September 1, 2018 with burial to follow at Trinity Memorial Gardens. In lieu of flowers, the family asks that donations be made to the endowment of the YMCA of the Suncoast.