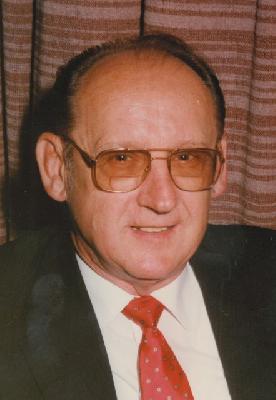 He was born and raised in Port Washington on Long Island. As a youngster he lived for a time on an estate where his dad was a chauffeur. Working on other Gold Coast estates offered him the opportunity to meet some of the rich and famous, such as Clark Gable and Greer Garson.

Dad was a volunteer fireman and loved to tell stories about hopping out of the classroom windows of his high school when he was a junior fireman to respond to calls.

Old enough to enlist in the army just as the Second World War ended, he was stationed in Panama and drove a transport vehicle in the Canal Zone.

Ed worked in a gas station in town in and then later in the A&P. He went to work for Grumman Aerospace in the early 50â€™s. During his more than 35-year career he worked on the F-14, A-6, E2C and the wings for the shuttle and expedited parts for the lunar module.

Shortly after retiring he took up golf. When he and mom moved to FL he reconnected with a Grumman friend and with several other guys who became the regulars on the golf course.

A vintage car enthusiast, one of his very treasured possessions was a 1927 Model T Ford – same vintage as him as he was born on June 17, 1927.

Ed was preceded in death by his parents Frank and Alexandra Swientockowski (who passed when he was an infant) and Alexander and Bertha Budny as well as his forever love, Josephine.

A caring and delightful Dad and Grandfather, he is survived by children Pam Budny, Wayne (Kimberly) Budny and Donna (Keryakos) Hasapidis as well as grandsons Andrew and Joseph Budny and William and Benjamin Hasapidis. He will be dearly missed.

Visitation from 8:30-9:30 am Wednesday February 20 at Dobies Funeral Home, 6616 Congress Street, New Port Richey FL. A Mass of Christian Burial to be celebrated at 10 am at St. James the Apostle Church in Port Richey, FL Interment to follow at Trinity Memorial Gardens mausoleum.

In lieu of flowers please consider a donation to St. Jude Childrenâ€™s Hospital.