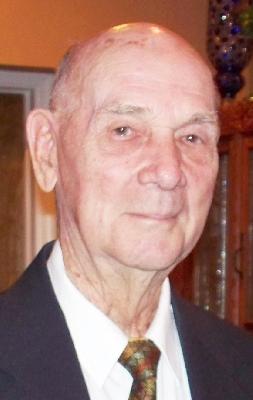 Frank Charles Black, Jr. passed away in Hudson on Dec. 12. He was born in Paducah, KY, April 7, 1927. While married to Eleanor Mae Van Tuyle, they had seven children before she died in 1972. He married Lana Marie Brown in 1986; she was his partner in every endeavor and his faithful caretaker during his final days. Frank served in WWII, graduated from the Univ. of Louisville on the GI Bill, and taught high school English and Language Arts for nearly 40 years in KY and at Clearwater High in Pinellas County. Living with his family on farms in KY and FL, Frank raised dairy cows, vegetable gardens, and planted 2,000 cedar trees annually. He was above all a teacher and believed that creating or building was what one must do. Over the course of 50 years, he designed and built eight homes, over a dozen garages, barns, and other structures using primarily his own labor and that of his children who were old enough to help. He instilled his work ethic in each of his children: Virginia Cochran, Leslie Hibbs, and Elicia Nystrom, Hudson; Van Black, Dunedin; Teresa Rotunda, New Port Richey; Reed Black, Vienna, VA; and Roberta Gutierrez, San Rafael, CA; 14 grandchildren; and eight great-grandchildren.

So sorry for your loss Terry, especially at this time of year. Our dads are such special people in our lives, so I hope your memories will be a comfort to your at this time. Prayers for you and your family!
Teri

Frank will always be a special person in our lives. Our love and prays to his family.

Dear Lana and
family, we are so sorry for your loss. We will be praying for healing of your grief in the days ahead.

So sorry to hear of your loss. my thoughts and prayers are with you at this difficult time.
Sincerely,
Roger