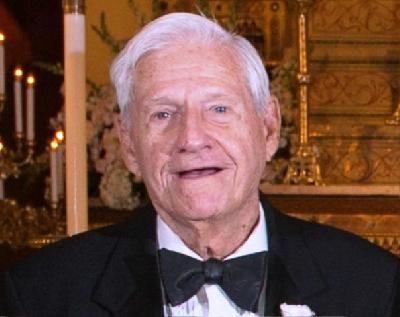 Warsick, Frank M. – September 25, 1925-September 4, 2018–his light shone to God's glory on earth and is now shining in Heaven. A U.S. Navy World War II veteran, Frank served in many vocations during his almost 93 years of life. However, his passion remained music. Self-taught initially, he began playing trombone at age 17, entering the United States Naval Band. After discharge, he continued formal training at University of Tampa, earning his degree in music education. While at UT, he played trombone in the Tampa Philharmonic under direction of conductors Lyman Wiltse and Alfredo Antonini. Additionally, Frank enjoyed playing in “Big Band” ensembles in Hillsborough and Pasco counties, including the Swing Sound and The Serenaders. Yet, he treasured most among his accomplishments creating and nurturing band programs, both in the Hillsborough County School District and particularly at Temple Heights Christian School.
He was predeceased by his wife, Mary Laxton Warsick and leaves behind to celebrate his life his children: Francine (Adam) Gersting; Michael (Sherri) Warsick; Katrina (Ron) Warsick-Rinzivillo; grandchildren, Dr. Nicole (Jake) Brainard, Alan Haddock, Daniel Warsick; sister-in-law Carol Laxton; niece, Claudia Snook; nephews, Bob (Cindy) Laxton; Paul (Sydney) Laxton; Mark (Alice) Laxton; Steve (Linda) Stoltenborg; as well as many beloved great nieces, nephews and friends. Frank's family expresses deep appreciation for the care provided him, especially by Dr. Arnie Tannenbaum & Associates, Dr. Khaja Zaki, Dr. Radhika Menon as well as the staff of Bayonet Point Hospital.

We are incredibly blessed to have had such a kind and patient neighbor who quickly turned into a friend. His smile and spirit will be greatly missed. Our love to you Frank, and prayers for his family.

I was heard that the greatest compliment one could receive was that they were the same every time you met them. This was Frank. He always had a smile on his face, a song in his heart and a spring in his step. Our loss is certainly Heaven's gain!

Praying for Frankâ€™s family, for their peace and trust in God in the deepest valleys they might face. For God to be glorified through this beautiful manâ€™s life. Thank you Katrina for always being an amazing neighbor. I am so thankful that you and your father were our family when we lived in Bella Via. I loved growing up in a safe neighborhood, on a safe street. Sorry about our tennis racket band when we and Manaciniâ€™s were kids. We were so bad! I promise I write better music now. I wish I was able to be there for Frankâ€™s celebration of life. I love you!

A pleasant and truly happy and kind man even as some of us much younger became grumpy old men. Frank….a great example of how to live life. I know he's still happy and smiling together with his wife in Christ