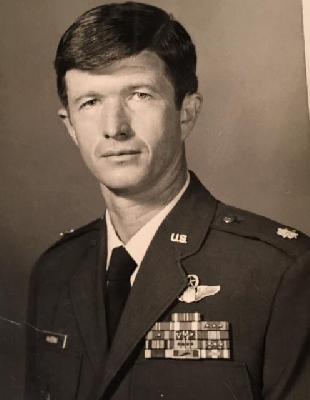 McKenna, George William
Colonel (ret-USAF) George William McKenna passed away in Tarpon Springs, Florida, on November 15, 2019, at the age of 79. He was born on June 3, 1940, in Jersey City, New Jersey, to James and Margaret (Stahl) McKenna, both now deceased. As a child and teenager he lived in Pennsylvania, New Jersey, Seattle, Florida, Alaska, Georgia, California, Japan, and Massachusetts while his father served as an officer in the United States Army Signal Corps.

He graduated from University of Massachusetts Amherst in 1962, where he was a member of the now-defunct national fraternity Q.T.V. It was there that he met Marsha Hargraves of Merrimac, Massachusetts. They were married just after graduation and right before his commissioning as a Second Lieutenant in the Air Force.

He served with the United States Air Force for 27 years, including a year-long tour of duty in Vietnam from 1967 to 1968. Other duty stations included Homestead and Tampa in Florida; Langley, Virginia; Clark AFB in the Philippines; South Korea; Aviano, Italy; and Hickam AFB in Hawaii.

Throughout his military career he was a fighter pilot flying the F-4 Phantom II. He had two tours of duty at MacDill Air Force Base in Tampa. From 1969 to 1973, he was with the 1st Tactical Fighter Wing. Later, from 1980 to 1983, he was with the Rapid Deployment Joint Task Force, the precursor to CENTCOM.

1n 1978, while assigned to the 3rd Tactical Fighter Squadron at Clark AFB, he was the team leader of the PACAF entry to the biennial William Tell air-to-air weapons meet at Tyndell AFB. He also spent a year as the commander of the 35th Fighter Squadron in Kunsan, Korea.

Upon retirement from the Air Force he continued to fly as a pilot with TWA Airlines on both international and domestic routes for another 10 years. He owned a series of historic aircraft, including a Stinson Air Station Wagon, which he exhibited at both the Oshkosh Airshow in Wisconsin and the Fun â€˜n Sun Fly-In in Lakeland, Florida.

Among his hobbies were water-skiing, tennis, and photography. His photos were frequent award winners with the Suncoast Camera Club. He was also a past president of the Lake Tarpon Sail and Tennis Club.

A memorial service will be held at Dobies FH on Saturday November 23 at noon followed at 1pm by a funeral Mass at St. Ignatius in Tarpon Springs. In lieu of flowers, please consider a donation to the Salvation Army.

Marti and I will miss the thought that George is still out there with that twinkle in his eyes. Our house is always open to Marsha and the McKenna clan.

Heartfelt sympathy, Marsha, to you and your family.

Marsha,
Our heartfelt prayers and condolences reach out to you in your time of grief. George's ever-present wry sense humor will be missed.
In His love & grace,
CT & Susan

George was a top notch fighter pilot and a great overall person. Everyone in our Squadron loved him. Rest In Peace, Fighter Pilot.

Marsha,so sorry to hear about George. When I was getting ready to go pilot training, George took me aside and told me I would have a hard time in the T-37, but to hang in and I would excel in the T-38. I credit him with my success

Red and Arlene (Friend and Colleague)

Pilot, patriot, and pal whose friendship spanned 30 years with shared USAF and TWA experiences. Safe journey, George. Thank you Marsha for sharing him with us.
Volabamus Volamus

Our sincere sympathy to Marsha and family. George was a bright light in our flight at Big Spring.

It was with great sadness that I learned of Georges passing; please accept my heartfelt condolences.

I am saddened to hear of your loss. My thoughts and prayers are with you and your family during this difficult time.

I threw a nickel on the grass today as we lost another great one.