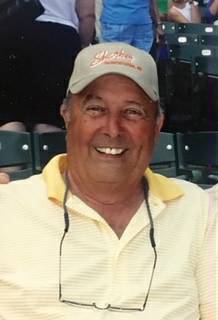 In Memory of Henry (â€œHankâ€) Power
October 31, 1935 – February 4, 2019.
Hank is survived by his wife, Eleanor (Johnson) and their son Scott (Wendi), and daughter Anne Malley (Craig) and grandchildren Claire and Christopher Malley and Sydney and Dylan Power.

Hank served in the National Guard and enjoyed a long and successful career in the trucking industry as a freight salesman for various national freight carriers across the country. Before retiring in 2001, Hank lived with his family in LaGrange Illinois for more than thirty years, and was actively involved in Emmanuel Episcopal Church, as well as community youth sports, including coaching little league baseball and the YMCA swim team.
Upon retirement in 2001, Hank moved to Florida and built his home in Trinity where he made lasting friendships with his neighbors, golf partners and fellow parishioners. Hank became a faithful and vital member of the All Saints Episcopal Church in Tarpon Springs.
Golfing was a favorite pastime for Hank and upon retiring here to Florida, he enjoyed his first hole-in-one shortly after joining the Fox Hollow Golf Club. Hank also found time to volunteer at the grade school, visiting once a week to read and tutor 3rd graders. In fact, Hank was the recipient of the â€œOutstanding Volunteer Awardâ€ by Pasco County Retired and Senior Volunteer program in 2003 and was honored by a student in 2006 to be the inspiration for her 2nd place award winning essay â€œMy Favorite Older Personâ€.
Hank also served his community by becoming a member of his homeowner associationâ€™s board of directors.
Hankâ€™s other passion was fishing. Hank travelled to Canada every summer with longtime friends and family from the Chicago area to enjoy the walleye fishing and camaraderie it offered.
In addition, for 17 years after retiring, Hank planned and organized a baseball skybox party at White Sox park in Chicago for customers of his former employer.
Hank was preceded in death by his parents, a brother David Power and his youngest son Andrew Power.