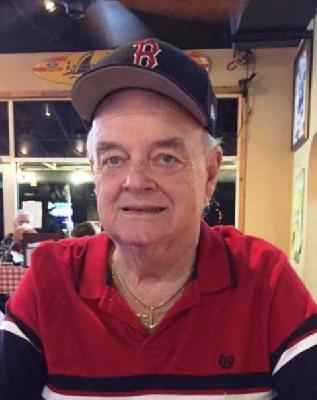 John Charles Oâ€™Brien was born in Somerville, MA January 26, 1940. He was from a family of six and is survived by his wife Elaina, his two brothers Roy and Tom and his sister Patsy. He had two children Kerry Olofson her husband Troy Olofson and Neil Oâ€™Brien all living in the seacoast of NH. He had four grandchildren: Brydie, Shea, Ailey and Ely.

â€œJackâ€ was raised in Saugus MA and later lived in Rockport, MA. He was an excellent athlete as a teenager playing hockey, baseball and softball and continued as an adult as player and coach in the Menâ€™s Softball Leagues.

Jack was employed at the General Electric in Lynn, MA in the Apprentice Course and as a master machinist, where he won many awards and merits for his engineering abilities. He also worked as a young man at the Boston Madison Square Garden Club at â€œThe Gardenâ€.

Jack was a recurrent visitor to his cherished island, Bermuda, where he often brought friends and family alike to spend time. There, he was known among local friends to share conversation, exchange political views and witty jokes.

Jack was co-owner of Oâ€™Brienâ€™s General Store in Seabrook, NH and later, Jackâ€™s Gas Station. Once retired from the industry, he enjoyed Tuna fishing with his son Neil, and did so until he was 75 years old.

Jack was always a happy soul and had an infectious personality. Once living in Florida, Jackâ€™s passions were golfing, dining out and especially water volleyball. A man about town, Jack was a proud connoisseur of Irish foods. He never missed a Saint Pattyâ€™s day celebration.

There are many stories that will define Jack Oâ€™Brien as a person. He was somewhat of a rascal and enjoyed many hobbies, amongst them, boating, horseback riding, bowling, owning corvettes and driving fast. He traditionally attended opening day at Fenway Park to watch his beloved Red Sox. To this day he is recognized by all by wearing his Red Sox hat.

Jack always supported his family members and was the most generous person you could ever meet. Jack was super funny, kind, charismatic and a very caring and compassionate man.

As a father he was second to none. He would do anything for his children, Kerry and Neil. He was dedicated to attending his childrenâ€™s sporting events, never missing a meet or a game, and also actively engaged in their coaching. He never missed an opportunity to give a quick history lesson on his favorite, General Douglas MacArthur, or take them out ice skating on a Friday night.

Jack was the toughest man anyone could meet. He would take the shirt off his back to help others and would go without to do so. He was always a strong support for all those he loved. He will continue to be loved, missed, and remembered by all who knew him.

Jack Oâ€™Brien will also be honored up North. There will be a Catholic service for him at Saint Michaels in Exeter NH at 11:00 on March 19th

Neil & Family,
We are so very sorry to hear of the loss of your father! May good memories comfort you and heal your heart.

I mate Jack and his wife at my boat club they stop by one day just looking around so i saw them outside so i ask them if they were lost he said no i said would you like to come in and have a drink he said we can do that i said yes because i am the commodore,commodore the one person that in charge so you are welcome so what would you like to have to drink i was having a elephant beer at the time so the wife said i will have one i said it is very strong 7.5% jack said dark & stormy i say to my self these guys are cool we exchange number and address we stay there for a few hours.i went and stay with them a few time went they came to Bermuda they all ways look me up and we all ways went out Jack was a party guy all the way what was nice these guys was not prejudice they were down to earth people i have mate many of people because i am a captain so be nice so have nose up in the air but we became best of friend for life.

Elaina my deepest sympathy on the loss of your loved one Jack!

This is such a beautiful tribute. I remember Jack as a truly generous and genuine man. May Uncle Jack be united with his parents,and two siblings that are waiting for him in heaven in eternal life. Please know I am praying for you, Patsy, Roy, Tom, Kerry, Neil, and Elaina.

Thoughts and prayers go out to the whole family. We will always cherish our memories of Jack. Loved his antics in the pool while playing water volleyball. Also when Tommy came to sing around ST Patrickâ€™s Day the whole family get together was awesome.

A poem I wrote inspired by God.

Please grieve no more for me. I am always here, all you have to do is talk to me. For there is only a shell here on the earth; for my soul is with God and my spirit is with you all.