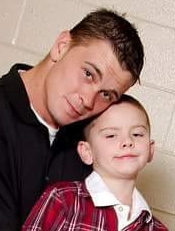 John had found love again with fiancee, Rachel Poliseno, and was the happiest he had been in a long time.

Johnny, you are loved and missed by so many in our family. I pray that when we all meet in heaven to see you!

I love you now and forever. You will always hold that special place in my heart. I am sorry Kelly and Rodney. Love you both

Im sorry for yalls loss…
he was a great guy.
Always making everyone laugh…
RIP JOHN PITTMAN,
GONE BUT NEVER FORGOTTEN SEE YOU SOON BRO..
TELL MY SISTER LORETTA I LOVE N MISS HER TOO
LOVE YA…

I love you Johnny. My heart breaks. Your strength in the last month is something we are all so proud of. You were taken way to soon. Thank you for making me Aunt Beffy. I just wish I could hear that one more time. Your heart beats within us forever and always.

Kelly, Rodney, Lorrie, Ross and Bub, My heart aches along side yours. I loved that boy so much. The void he leaves behind is immense.

Nanthanul, your Dad loved you so very much, remember that. If you need someone to remind you, just let me know.

We are a phone call away at any time.

Kelly, Lorri and Ross there are no words to say other than I know what your heart, mind and soul are feeling. I love all off you, Johnnie I loved you from afar. I remember that little boy that I met in your PopPop's house playing. And I we I'll always cherish that meeting.
Prayers, love and hugs to all your family.

Rachel Poliseno (Wife to be)

I've never been head over heels for anyone in my life and for the 1st time I was lucky enough to find my soul mate. Our house is not a home without you and I still wait at the window waiting for you. The day b4 we become man and wife but I guess God needed you more
You always called me your Angel n now you are mine forever Johnny I love you baby