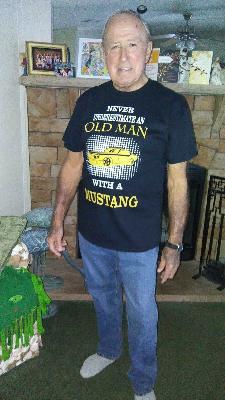 Karl was born and raised in Wilbraham MA. He went to Wilbraham High School and then trade school in Wilbraham where he became a certified electrician February 1st 1960. Once certified, he opened and owned his own electrical business in Wilbraham Later; Karl moved to Florida and worked for Gator Electric in Rock Ledge on the East Coast. He then moved to the West Coast in Holiday FL. and worked for AAA Electric for 25 years and then worked for North Bay Hospital for 17 years.

Karl will be remembered for his wonderful smile and his outgoing personality. He was a loving husband, father and grandfather; he can never be replaced in our hearts!

Flowers/Donations can be made to The American Heart Association

Chris and I would like to say that it was a privilege to have known such a delightful gentleman. Our sincere condolences to Brenda and the family and we wish you love and comfort in the days ahead.

Chris really enjoyed conversations with Karl.
We will miss you Karl but your presence in our lives was a blessing.

I was very saddened to hear the news of Karlâ€™s passing. I shed tears when I heard the news. He was a dearly loved patient .Karl possessed such kindness.; such a joy to see when he came to the office. Such a positive man. I am so sorry for your loss. He touched our lives â€”. May God bless you all and may Karl drive his mustang fearlessly and smile as he does such! He will be missed.

So sad to hear about Karl.
It was a privilege and a great honour to have met and spent quality time with him. Never had a bad word to say about anyone. He cherished and loved his family, friends, animals and of course his mustang. My thoughts go out to Brenda and family. Rest in peace Karl, you will be sadly missed.