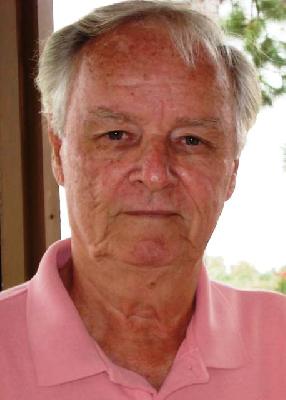 Throughout his 90 years, Len remained proud of his Swedish Heritage. His parents, Oscar Nils and Evy Lindstrom, immigrated to the United States from Sweden. Len loved to share the story that he was born into notoriety by having the published distinction of being the first baby born on New Yearâ€™s Day within the city of Chicago, IL in 1928. He had two elder sisters, Helen Lindstrom Lewis and Ingalil Lindstrom Coakley, who were also born in America and preceded him in death.

Len was raised in Skokie, IL then Evanston, IL and graduated from Evanston High School in 1946. Following High School graduation, Len enlisted in the U.S. Army and served in Occupied Japan as Military Police at the Sugamo Prison in Tokyo. After attending Lawrence College (Appleton, WI), Len established his professional career at Washington National Insurance Company where he retired as Assistant Corporate Secretary in 1985.

Len and Marjorie relocated to Port Richey, FL in 1986. Len took great joy in his recreational interests including golf, woodworking, Big Band and Light Classical Music as well as family travel adventures over the years. He also demonstrated his artistic talents with pencil sketches.

Len remains beloved by family and friends who witnessed his rare and genuine character as a gracious, honest and intelligent man of integrity with an infectious sense of humor and joyful Spirit.

RIP Daddy, you are now free of pain and suffering. Until we meet again, further on up the road. With love, your number 1

Dear Dad,
Thank you for all the love, laughs, support, and fantastic memories. I could not have asked for a better father.
I still have every Bobbsey Twins book you brought home for me, and every letter you sent to me at college. You fostered a love of reading and learning that lives on in your family.
I will love you and miss you all the days of my life. Taps.
Kris

Thank you for being such a great person. I appreciate your caring and kind nature, and I miss you very dearly.

Thank you for all the amazing memories we have had in our family. I will continue to play sudoku in rememberance of you, the best grandfather ever.

Dear Dad, I will miss and love you forever…until we meet again…Taps. Love, Diane

Thank you for sharing your family with us. Your legacy lives on through them. Your caring spirit and practical jokes will be shared for many generations to come. Last tag until we meet again. Rest In Peace.

Drake, Aiden and I will miss you beyond words. Thank you for everything youâ€™ve done and always keeping me on a straight path. Tell my daddy I love him ðŸ’š

After learning of Lenâ€™s health challenges last year, I made it known to both Marjorie and Len that Len remains one of my Favorite Men in the Universeâ€¦they already know the reasons why.

I would like to add how much I admired Len and Marjorie as a Lifetime Partnership. They demonstrated their strong commitment to each other on a daily basisâ€¦their mutual Love, Respect and Support was enhanced by their Genuine Playfulness as a Couple that grew stronger through their decades of Marriage.

The ever-creative and delicious homemade meals Marjorie prepared for Len each night became the foundation of cherished moments they shared throughout retirement. Marjorie has lost her Assistant Chef, but the precious memories of her Lifetime Partnership with Len are eternal!

With Loving Thoughts to Len, Marjorie and the Lindstrom Family,

Dear Pal,
I love and miss you! Thank you for all the fun things you taught me.

Dear Pal,
I miss and love you! Thank you for always being my Pal.

I know you will be so missed by your family and I remember laughs with you and the group after being accepted into the gang when Kris and I were in college together. Good dads are hard to find and you were a good one! Hope you and my dad can have some good conversations until the rest of us get there. Wishing Marjorie “Mom” and all the family warm and caring thoughts as they remember their many fond memories of you.

Though we are miles apart we enjoyed talking about boyhood pranks. College Hill Grade School will never be replaced.

We have lost a dear friend and wonderful man. We were truly sorry to hear of Len's passing. His delightful sense of humor and positive outlook were a constant source of inspiration to us, even on our last visit in April. We will miss seeing and talking with him on our frequent walks through the neighborhood. Our condolences go out to Marjorie and all Len's family members. We will miss him…………

Vicki Norr (My Dad was friends with Len)

I'm so sorry for your loss you father and mine had been friends for many years and when my dad pasted your Mom and Dad where there for me and my sisters. He was a great guy.