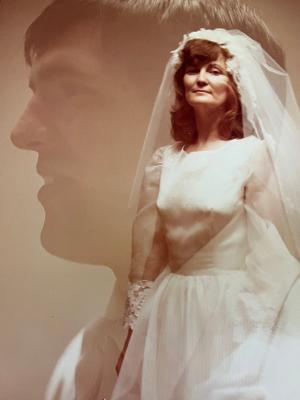 Loving wife and mother, Lydia Glenda Haught, passed away on September 16th. Glenda was 75 and was surrounded by many loving family members when she passed.

Glenda was born to Herbert and Ruby Pettis in 1947 in the Florida Panhandle. She was the first grandchild and was showered with love and affection.  She worked as an administrative assistant for the Church of God State Office before joining the United States Postal Service where she worked for 30 years, retiring as the Transportation Supervisor.

Glenda met her husband, Rick at the University Church of God and went on to have two sons, Aaron and Philip.  Rick and Glenda recently celebrated their 42nd wedding anniversary.

In addition to being a dedicated and loving mother, Glenda also loved reading and crocheting baby blankets.  Throughout her entire life, she held an unwavering faith in God, which she shared with those who surrounded her.  For many years, she served in the church nursery earning the nickname ‘baby whisperer’.  She also served as the Missionettes Coordinator at Victorious Life Church.  In addition to these acts of service, she volunteered at a local food pantry, Lily of the Valley in Wesley Chapel.

One ministry that was dear to her heart was the award-winning Powered by Jesus (PBJ) Youth Puppet team at Victorious Life Church. This was a ministry the whole family, Rick, Aaron, and Philip participated in with her.  They performed locally at their church as well as at local and international competitions.

Glenda joins her mother Ruby Pettis, grandparents Angus and Mary Rudd, Carl and Lydia Pettis, and aunts and uncles in Heaven. She is survived by many loving family members, including her husband Rick Haught, son Aaron Haught and his wife Tara Von Pusch, son Philip and his wife Stacey Haught and grandchildren Emery and Eloise, father Herbert Pettis, brother Tim Pettis, sister Myra Pettis, and many aunts, uncles and cousins.

In lieu of flowers, memorial contributions may be made to LifePath Hospice of Hillsborough County or the American Cancer Society.

And we know that in all things God works for the good of those who love him, who have been called according to his purpose. Romans 8:28

We too were stunned by this loss. Glenda was a person of few words but always spoke honestly and straight. After getting to know her, she would find you in a crowd and be always genuine and caring. Her cooking was always the hit of the party and of your waistline. She was a woman of great principles and character, who loved God and walked by faith. We will miss her face on Tuesday night couples ministry. Glenda left the fruit of a great family behind. Our family was truly blessed to have known her. She was always a blessing to all who knew her.

So very sorry for your loss. We loved her and will carry her memory with us for all time. You and boys are in our prayers,

“Grief never ends, but it changes. It’s a passage, not a place to stay. Grief is not a sign of weakness, nor a lack of faith……it is the price of love.” —author unknown

Saying goodbye to someone we love is heartbreaking. We take comfort in all the family memories shared with Glenda, but Sunday dinners will never be the same.

So sorry to hear of Glendas passing.

So very sorry to hear of Glenda’s passing. Praying for you all!

As you remember all the wonderful times shared and mourn your loss also remember that she has gone HOME and is no longer in pain. You are being thought of with warmth and sympathy.

Thinking of you all during this difficult time. May you find peace in the memories.