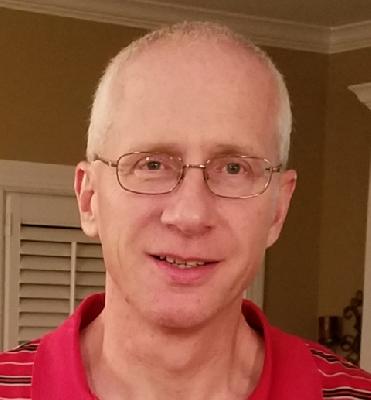 Michael Donald Greenleaf Jr., 55, of Trinity, Florida, passed away Wednesday, May 22, 2019, following a courageous battle with cancer. Born in Montclair, NJ, he later moved to Louisville, Kentucky where he married Angie and started a family. A graduate of UK, Mike had a rewarding career working for Brown-Forman and Dell EMC where he met brotherly friends like Steve Carr. Mike enjoyed swimming with his daughter, Katie, and was a part of USA and Masters swimming. He also enjoyed driving his Jeep, offshore fishing, cooking, and spending time at the beach. Mike was preceded in death by his father, Michael Greenleaf Sr; grandparents, Maurice and Kathleen Greenleaf, Anthony and Jennie Amato; uncles John and Edward Greenleaf, Peter Amato; aunt Camille Murray; brother-in-law Shawn Andrew; and dog Cooper. A loving husband, father, son, brother and uncle, Mike is survived by his wife of 24 years, Angie; daughter Katie; mother Connie Amato Greenleaf; sister Suzanne Andrew; brother Steven Greenleaf (Yancy Holbrook); aunt Peggy Greenleaf; uncle Anthony Amato (Betty); nephew Seth Andrew; many cousins and friends, and his dog Champ.Celebration of life will be on Tuesday, May 28th from 6-8pm at The Champions Club in Trinity, FL. The funeral will be in Louisville, KY on June 14th, 4:30-6:30pm in the Fireside room at Southeast Christian Church with a service to follow in the main chapel. Memorial gifts may be made to Shirleyâ€™s Way or Wounded Warriors Project.

I am so sad about this. I had the pleasure of working with him at EMC for several years. He was a pro, and very supportive and kind. God bless.

Iâ€™m very sorry to hear of your loss … Mike was a genuine human being and fought a courageous battle.

This is just a heartbreaking loss. He fought so hard. Now I wish him and his family peace.