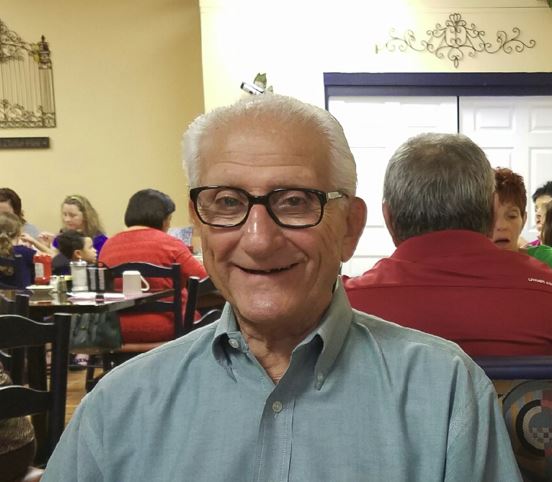 “Coach” Mike Karaphillis, beloved coach and mentor to young men on and off the football field, died on Thursday, June 16, 2022, surrounded by his family. He was born on November 10, 1930, in Youngstown, Ohio to John Michael Karaphillis and Kaliope Hazidrosos Karaphillis, both from Kalymnos, Greece. When Mike was six, he and his parents moved to Tarpon Springs, Florida, where his father began sponge-diving. Mike attended school in Tarpon and played on the TSHS Sponger football team from 8th grade through his senior year. For his outstanding athletic abilities, coach was awarded a football scholarship to the University of Florida to play football for the Gators. Not only did he make lifelong friends there, but he always said he was lucky to have been able to play with his childhood friend, Jack Pappas. In 1952, Coach married Norma Nicolaides from Miami, whom he had met five years earlier at the annual Epiphany Day celebration in Tarpon. They had three children, Mary Frances, John, and Nick. After college, Coach began a teaching and coaching career, first at Jefferson High School in Tampa, and then home to Tarpon Springs as a physical education teacher, and football coach. He has always said that the years he coached at Jefferson High, Tarpon Junior High, and then, coaching high school football for the Spongers were among the best years of his life because of his love for all of the students he taught. After coaching the JV Spongers to two undefeated seasons, and assisting the varsity team to their 1970-1971 undefeated season, Coach Karaphillis switched gears and became a property manager before owning his own painting business. Coach was also a Mason and an avid hunter. He is predeceased by his son Nick, and his two grandsons Nicholas and Michael Constantine Karaphillis. He is survived by his wife Norma, his daughter Mary Frances Gillespie and her husband Michael, his son John Karaphillis and his wife Cindy, and his grandchildren Rhett Cowart, Michael John Karaphillis, and Alexandra Jones. He is also the great-grandfather of Nicholas Pappas, Brooke Karaphiilis, Jude Jones, and Anna Karaphillis.

Please accept my condolences from myself and May late family Bill, Kay, and Mary. Anytime we had a chance to run into Coach, yourself, and your family was a time fit kind words, respect, and laughter. Coach’s memory will forever eternal. 😇😇🙏🙏

Dear Thea Norma, Mary Francis and John. So saddened to hear this news. Your family has played such a beautiful memory of my childhood years. I’m sure my dad and Jackie are having a party right now with your dad

So sorry for your loss,

Coach, you were always an inspiration to me and you always we behind me. I will never forget what you food for me in my time of need. You will be greatly missed. Whenever I came back to Tarpon Springs I would always look you up, last time I was there I went to your house only to find you had moved. I spoke to Norma later just to going you were not doing well. I am so sorry for your passing without having been able to see you again. Rest in Peace my dear friend, and may your memory be eternal.

So sorry for your lost. I remember him well prayers the family members. Lynne Brush

Rest in peace Coach……alas my Brother

I very fondly remember him being our PE coach at the old junior high when I was in school in the ’60s. A dedicated teacher and true gentleman. I went to school all 12 years with Mary Frances and remember they lived out across from our elementary school, Sunset Hills. Deepest condolences to the family and may he RIP.

Dear Norma, this is Michele, Doris Lauer’s daughter. I just wanted to let you know that I’m thinking of your family during this difficult time. It’s never easy 🤗

Please accept my condolences. He was a wonderful man. May his Memory be Eternal!

Dear Norma and Mary Francis,
Denis and had a shot in his memory. You will hear his voice sometimes and talk with him often. All those picture memory books will cried over. And he will be waiting for his darkly game.
I wish I could be at your side thru his service. Simply know that I am with in mind and heart

Dear Norma and Mary Francis,
Denis and I had a shot in his memory. You will hear his voice sometimes and talk with him often. All those picture memory books will cried over. And he will be waiting for his farkle game.
I wish I could be at your side thru his service. Simply know that I am with in mind and heart

From the first time I met your family in the early ‘70’s, I loved you all. Mike was such a warm and welcoming person with a great sense of humor! My thoughts are with all of you…Norma, MaryFrances and Johnny … as you go through this difficult time. Your memories will keep you warm and being you peace. May his memory be eternal

My condolences to you Norma and your family.Couch Mike was a great Man ,teacher and coach.He was a good husband and father as well.He was my mentor and will never be forgotten.God Bless.

So VERY many childhood memories of shared family experiences. While I fully understand your grief in this moment,I hope you find comfort in this ….. Dad is thrilled to have his “buddy” for all of eternity!

Mrs.K. Mary Frances and John. Our family wants to send our condolences to the family. You all are so special to the Crawford Family and mean so much to us. We will never forget Coach how he taught us well. (Nate ,Earnest and Ricky)..He was the best and Mrs K you are a jewel ,and the love you all shared with our family will never be forgotten. R.I.P. Coach and now you can still coach the player in heaven . Much love to you and you all will forever be in our prayers.