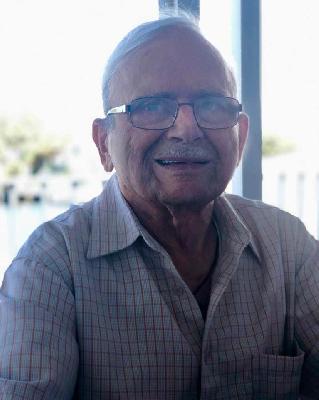 Nicholas (Nick) Ginnis fell asleep September 27, 2019, with his family at his side. His final days were spent surrounded by family and friends.
Nick was born on September 7, 1931 in Kalymnas, Greece. He was one of seven children born to Emmanuel and Anna Ginnis. Nick had to work at a very young age to help support the family.
He was a merchant seaman at the age of 17. Once he came to the United States he met and married the woman, he would spend 66 loving years with raising their family and building a successful business.
Nick worked very hard all his life and focused on providing for his family. Through his efforts and perseverance he became a successful business.
painting contractor. This helped him provide the opportunity for his sisters' and brothers' families to live a better life. He was selfless and possessed a strong work effort and was an inspiration to all his family.
Nick leaves behind his beloved wife Thelma, his children Calliope Mona (Thomas), Anna Saker, Mary Makris (George), Emmanuel Ginnis (Jeanette), 14 grandchildren whom he adored and 9 great grandchildren that gave him joy. He also leaves behind his brother Pantelis Ginnis and sister Irene Kalouris. He also leaves behind many nieces and nephews whom he loved. He was preceded in death by his daughter Bertha and siblings Elefterios Ginnis, Niki Klimis, Maria Kenenouni and Calliope Atsas.

Donations in lieu of flowers can be made to St. Nicholas Greek Orthodox Cathedral.

I am so sorry to here this . God have mercy on his soul .