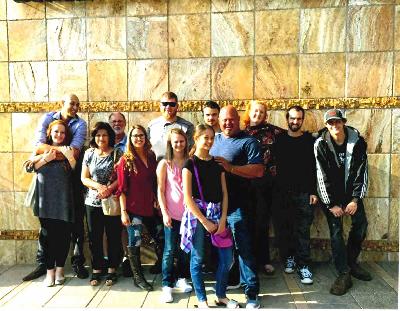 The larger than life and always joyful Richard “The Mayor” Gary Lawrence left this world all too suddenly on Wednesday June 26, 2019.

Born in Schnectady, New York on January 9, 1965 to Gary John Lawrence and Darlene Margaret Lamont Lawrence, he spent his youth in the upstate New York area. After moving to Pasco County, Florida in his late teens, he spent the duration of his life here. He would often joke that he has been here so long he is actually an official “Cracker”.

Rick was undoubtedly the kindest, funniest, most giving soul to everyone lucky enough to cross his path. He would light up a room as soon as he walked in and the energy and positivity could be felt in the air. He was passionate about the things that were important to him and put his all into every aspect. First and foremost was his family.

The pride and joy he got from his children was only mirrored by the amazing experiences and support he tried to show them. His grandchildren only escalated that happiness and made his smile even bigger. He accepted his stepchildren as his own and loved them fiercely as well. He always said that nothing made him happier and prouder than seeing them do better and go further than he did. They were all the light of his life and the topic of many bragging sessions.

He was an amazing, doting, and devoted husband and not only best friend but best buddy to his wife in good times and in bad. He was dedicated and attentive and willing to ride out all the unforeseen speed bumps that life can throw at you.

He was an amazing, powerlifter but competing was the smallest part of this passion. He got no greater joy than training a new athlete, offering tips to anyone who would ask, encouraging all of his friends and most importantly his closest competitiors. He always said that “your biggest competition is yourself”. He spent 30 years in the powerlifing world. He held numerous records with the bench press being his specialty and a great source of pride. He headed numerous teams as well as training Special Olympics athletes in the sport that he loved so much. Rick was the Florida state chairman of the American Powerlifting Federation and an amazing ambassador for the sport to athletes around the world. He put on numerous events of his own with the largest and most impressive of all being the World Powerlifting Congress 2018 World Championships. He put his heart and soul into every event and thrived on all the positive feedback. He was also hugely instrumental in helping any other promoter put on the best meet and experience possible. He loved his sport, his friends, his strength, and the opportunities to brighten and enhance the sport for anyone new he met. He was everyone's biggest fan and cheerleader and would jump in to do anything and everything for anyone whether he knew them or not when asked.

His third great passion after family and powerlifting was FUN. Anyone who is asked will always use that word in
describing him. He took his fun very seriously and just being in his presence insured that those in his company were going to have fun too. He loved to travel, entertain, and socialize. He grew a huge circle of friends simply because he never met a stranger. Everyone was always welcome and quickly went from stranger to friend. He enveloped people with his jolly warmth and people tended to gravitate to it. His smile was infectious. His laugh which was so genuine and intense would assure his belly shook and his cheeks were so high it was impossible to see his eyes.

He was generous to a fault. He could never tell anyone no and would often give even when not asked. He would often come home speaking of someone in a tough situation and immediately try to figure out how to help. He volunteered his time and knowledge in many different way to athletes but also participated with out reach in the community. He dressed as Santa and delivered gifts to the homeless and underpriviledged in the wee hours of Christmas morning in the New Port Richey area for a number of years as well as helping at many other countless events without ever advertising his time or expecting commendation.
He is survived by his loving wife Tamara who will always consider him the love of her life, partner in crime, and greatest advocate. He was the hero to and idolized by his beautiful children Michael Lawrence, Jane Lawless (Justin), Gabrielle Ivers (Justin), and Deborah Lawrence. He was loved by the stepchildren that he also wrapped his heart around, Ashley Jones, Alyssa Jones (Doug), Ethan Jones, and Austin Jones. He was magical force to be reckoned with and ultimate playmate by his precious grandchildren Lily Lawrence, Abigale Lawless, Riley Lawrence, Aubrey Lawless, and Anderson Jones. He was extremely blessed and appreciative to still have the support of his parents Gary Lawrence (Barb) and his brother Robert Lawrence (Barb) who he always knew were in his corner. A host of numerous amounts of nieces, nephews, inlaws, cousins, etc will also sorely miss him. “Family” was never about blood to him and there are so many who were blessed to be counted as part of his family.

Although may are mourning the loss that special light he shone on us all, we are all better for getting to bask in it if even for as short time and the stars will twinkle much brighter tonight.

The family asks that you join in a Celebration of Life following the services at The Village Pub at 1pm at 6217 Grand Blvd in downtown New Port Richey, FL. 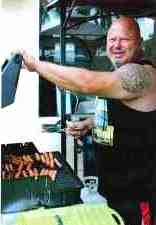 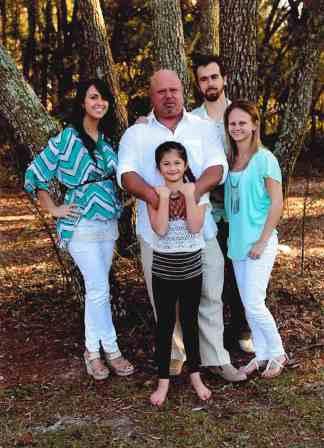 Ricky , I will miss you dearly . Our children are having hard time with you leaving to soon . They will never be the same without you . Love you always

Gabby like everyone we were so sad to hear the news,of your father father's sudden passing. Although we've only met your father a few times he always greeted us with a smile that same smile you always greet us with. You and your family are in our prayers.

Weâ€™re so sorry for the family & friends who lost such a good man. He will be missed but also remembered!

Rick was one of the best Fatherâ€™s and equally a wonderful Husband. He always had a smile on his face and no one was ever a stranger.
He loved Tamara and his children with all his heart. They were his life and made him so happy.

My very deepest and most heartfelt condolences to the family,loved ones and friends of Richard Lawrence. He led an absolutely amazing life. In knowing his amazing daughter,Gabby, I know he an exemplary human being, husband, mentor and father. My prayers remain with each of those who knew and loved Richard. His legacy stands as a powerful example for each of us to follow and aspire to. Peace and Fraternity Always, Jason johns and Family

I love the Lawrence family like my own. You are all in my thoughts and prayers every day. My heart just breaks for every one of you. Rick, thank you for always welcoming me into your home for family gatherings and a special thank you for taking the role of a second dad to Justin after he lost his dad. You left behind a legacy that you will always stay proud of. May you rest in peace and keep smiling down.

I love you dad.

He was a great man who will be missed by many.

My heart goes out to you, sending strength and comfort as you embrace your memories. My daughter, Brooke Straub, was a huge fan of RL; he was a great and positive influence in her life.

I am deeply sorry for your loss. Beautiful tribute to Ricky. Gary and Barbara spoke of him fondly. I feel like I knew him a long time. My sympathy to you and your family at this time. Know he is at peace.

My deepest condolences to my good friend Gary and Rob, and to the rest of the Lawrence family. I'll always remember Rick and his humor (always made fun of himself before making fun of you) Some of the best times in my life were on our hunting trips with Rick, his dad and brother. We laughed and laughed alot! He was a great guy and I know he was loved by many. My thoughts and prayers to family and friends during this difficult time. Rest in peace my friend.
Here's to you(me)
-John McCabe

I don't even know where to begin. I was shocked and saddened at the last to hear that you passed away. Definitely gone too soon. You were always a really great guy, and one of a kind. I'm glad that I was one of the lucky ones that got to not only just meet you, but end up being good friends with you. We all had some great times way-back-when together that I'll never forget. I'm sorry I'm not able to make it to your memorial service. If I was able to, I would definitely be there. Even though I can't, I'll be three in spirit. My thoughts and prayers are with Tamara, Michael, all your beautiful girls and all of your many other friends that love you. Rest in piece my dear friend… until we meet again…

Rick was an amazing Father to his children and such a good Husband to Tamara. He loved everyone and never knew a stranger. He had such an infectious smile. When you were him you felt just plain happy.

Rick was an amazing Father to his children and such a good Husband to Tamara. He loved everyone and never knew a stranger. He had such an infectious smile. When you were him you felt just plain happy.

Rick,
Thank you for touching our lives…knowing you has made us better people. Until we meet again!

Please accept our heartfelt sympathies on the loss of your loved one. Our Thoughts and prayer are with you and your family!! Henry, Alice, Bill, Larry, Ron, Brent and Justin