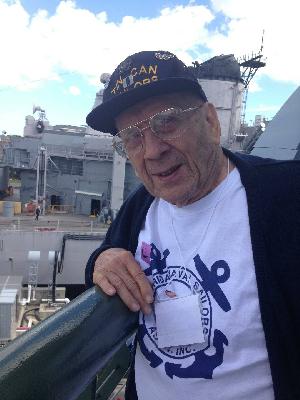 Nist, Robert J., 93, of Trinity passed away on January 31, 2019. He is survived by daughters Joyce Casto (Trinity, FL), Sue Meyers (Eastlake, OH) and Judy Born (Columbus, OH); daughter-in-law Ellen Nist (Zanesville, OH); six grandchildren,11 great grandchildren, one great-great grandson and a sister, Emma Lou Kraft. He is preceded in death by his loving wife of more than 64 years, Ruth Marie, and beloved son, Robert Albert. Bob left an impression everywhere he went and will be remembered for his bright smile, quick wit and joking personality. He was born in Pittsburgh Pennsylvania. He is a 1946 graduate of Cornell University and was committee chairman of his 70th class reunion. Bob served in the U.S. Navy (LTjg) during WWII and the Korean War. He was a proud member of the â€œTin Can Sailorsâ€ having been assigned to the USS Montpelier, USS Beatty and USS Melvin. He later became a machine engineer and was active in the United States Power Squadron, achieving the rank of Commander. His civilian career moved he and his family from Pennsylvania to Connecticut then to Ohio. Bob â€œretiredâ€ in 1980 and re-located to Florida where he earned his real estate license and general contractors license. Bob was also a tax preparation volunteer for AARP/United Way and a proud member of the Florida Naval Sailors Association and American Legion. He was an avid Pittsburgh Steelers fan and enjoyed attending Tampa Bay Rays baseball games. Bob was cherished by everyone whose lives he touched and his smile and sense of humor will be missed by all. Visitation will be held on Tuesday, February 5th from 5:00pm â€“ 7:00pm at Dobies Funeral Home Chapel, 8825 Old CR 54 in New Port Richey, FL. Mass of Christian Burial will be on Wednesday, February 6th at 11:00am at St. Ignatius of Antioch Catholic Church; 715 E. Orange Street, Tarpon Springs, FL.

As a young man, Uncle Bob was an inspiration for me. After attending the US Naval Academy, I became a “Tin Can” sailor just like him. I always enjoyed talking with him and his tales of the sea. While we were not as close as I would have liked, every time I was with him, was like old times. He was a joy to be around, close brother to my mother, and will be missed.

Laura Jo Fiorilli and Family (Friends of the Family)

Our Deepest Sympathy goes out to the entire Nist Family….Sue/Joyce and Judy…our hearts are with you at this very sad time…Your Dad was a great guy, we loved his sense of humor and his outlook on life…God Bless him Always
Love and Prayers…Laura Jo and Mike Fiorilli and Family

My thoughts, love and prayers to my cousins and family as we mourn the loss of this dear sweet man.Uncle always had a quick smile, dry wit and loving, engaging personality. Always a gentleman, he was loved by all and will be greatly missed.

We enjoyed Bob's many stories and his Bridge expertise! He has been missed in Heritage Springs. May happy memories prevail!
Our sincere sympathy to the family.

It was always special when Uncle Bob was present for family gatherings even though we never had enough of them. To my mother, he was a loving brother who was always there for her growing up. Being only a year apart, they were very close.
My husband connected with Uncle Bob when we attended a Navy ship commissioning in Tampa years ago. Since then, they had some great conversations and emails, including a few sea stories!
Iâ€™m thankful we grew closer these past few years. He was there for my motherâ€™s 90th birthday party, thanks to his loving daughters! What a fun celebration seeing the two of them laughing together.
I also appreciated Uncle Bobâ€™s descriptively written stories of Grandpa Kuhnâ€™s meat packing company and various other family memories.
Heaven has gained a wonderful man, another member of the greatest generation.