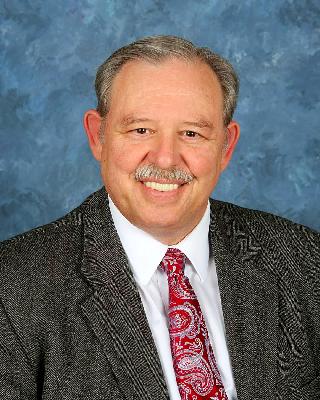 The Rev. Dr. Jack M. Long, pastor, was called home to be with the Lord on Sunday afternoon after preaching that morning. He will be remembered as a steadfast and passionate servant of God, a faithful and devoted husband, and a revered and cherished father and grandfather.
Rev. Long was born in 1951 in Johnstown, PA, the son of Harry Long, Sr., and the former Mary Jane Thomas. He was their sixth son, the youngest of the family, and the forth of their children to enter the ministry. As a child he developed interests in community service, history, humor, and sports, all of which he maintained throughout his life. His driving focus, however, was his vocation, which he viewed as a sacred and profound calling from an early age.
Rev. Long met his future wife, Glenda Rose Hargis of Terre Haute, IN, in 1969, when they were both college freshman in Chattanooga, TN. They were married in 1974, their union lasting until his death after 44 years together. Their marriage produced two sons, Adam and Seth, and a grandson born last year, Henry.
While an undergraduate Jack worked as an Athletic Director for the local Salvation Army, assisting and guiding urban youth. After graduating, he returned to his hometown of Johnstown to be the Associate Pastor at Emmanuel Baptist Church and later briefly served as the Interim Pastor at the Echo Union Church in Echo, PA. Afterwards, he pursued additional education and seminary studies while still working as a minister and community organizer.
In 1977, Rev. Long and his family moved to Dilltown, PA, where he was to lead the congregation of Memorial Baptist Church for 21 years and through the celebration of its first centenary. Among many other accomplishments, during his tenure at Memorial Baptist he established an active multi-church youth fellowship, created a summer-winter camp ministry that hosted hundreds of children, greatly expanded the churchâ€™s global missionary support, and founded a senior adventuring club. He also offered prayers and acted as a chaplain to many local organizations, and most notably served as the Treasurer of the Southern Allegheny Flood Recovery Association, which helped the surrounding area rebuild from disasters and loss. â€œPastor Jack,â€ however, would undoubtedly consider his greatest testimony the fact that he routinely preached three or more regular services a week and was unfailingly dependable at hospital and at-home visitations to the sick and the elderly.
Rev. Long moved to Florida in 1998, where he continued to preach and develop radio programming. In 2004, he was offered the position of Director of Pastoral Care and Chaplain for the Regional Medical Center, where he ministered to the ailing and the bereaved, comforting and guiding suffering individuals through difficult decisions and outcomes and helping to set hospital policy. During this time he also became the pastor of the Holiday Mission in Leesburg, FL, and became active in several local ministeriums, positions he maintained until his passing. Throughout his entire life he continued to be an active, courageous, vibrant, and strong-willed part of the communities that he adopted and loved.
Rev. Long was predeceased by his parents, his stepfather Robert Horner, and by three brothers, Harry Ross Long, Jr. (â€œChipâ€), Rev. Charles Warren Long (â€œBudâ€), and Rev. Wayne Arthur Long. He is survived by his wife, sons, grandson, two brothers (Rev. Richard D. Long and Rev. Stephen J. Long), a Uncle Dean, three step-dobiesfh@aol.siblings, and a daughter-in-law (Rebecca Everett).
Rev. Jim Brannon, Rev. Dr. Kent Fuqua, and Rev. John Ribbe will be conducting his service locally. The following week there is to be a visitation and committal service in Johnstown, PA, with burial at Forest Lawn Cemetery.
For many years Rev. Long battled health concerns and physical pain, but refused to yield to the demands of the mortal world, believing that ease awaited him only when his Creator, who he adored and served without question, decreed that his service was complete. He looked forward to that day, especially the opportunity to see dear family and friends long missed, but trusted God to pick the time and place.
Those of us who remain on this side of the divide are confident in his conviction and dedication, grapple with his overwhelming standard and legacy, and that know his eternal reward was waiting for him, where there is forever joy, peace, and rest.

I would like to offer your family my heartfelt condolences on the passing of Chaplain Jack.

I was the secretary of St. Michael the Archangel for over 12 years, and during that time, I was in contact with him fairly often. Chaplain Jack was a compassionate, gentle man, one who was there for the patients and families of those in the hospital. He will be sorely missed.

Nahum 1:7 â€œThe Lord is good, a stronghold in the day of trouble, and He knoweth them that trust in Him.â€
Dear Glenda,
Our prayers are with you at this time of the home going of Jack.
May you feel Godâ€™s love surround you each and every day.
In Christ,
The Sharits family

It was a pleasure to know Jack and to work with him. He was truly a Man of God. My sincere condolences to his family.

Rev Jack Long form a lasting foundation to my faith that has lead me to great things. I now pass the things he help reveal to me on to my own kids. He will be missed by many but his Godly work will never be forgotten. We will see him again and all enjoy the kingdom of God together.

Karen and I are saddened to hear of Jack's passing, yet celebrate with him that he is now with the Lord of Host and will forever be in His glorious presence and suffers no longer.

Prayers for your family in your sorrow. For us the news was sad to know Pastor Jack was no longer with us. It was also good news because we know Jesus said welcome home and rest, my good and faithful servent. Bonnie(RN)& Don (volunteer)

God gifted us with Jack.
I am so honored to have known him. I am so sad.
We will pray for him every day and hope to continue his work of bringing comfort to all.

Rejoicing that Jack is now in heaven with his Lord Jesus. Sad for the loss here. Jack had an incredible and far reaching impact on my life. So many laughs and memories. He taught the scripture and opened Gods word teaching truths I still remember. Love to family.